The nation’s sack leader a season ago, few would make the argument that Alabama linebacker Will Anderson Jr. is anything other than the best defensive player in the country. Anderson’s 2022 season did get off to a slow start, but things have picked up the last few weeks; the defender tallied a season-high 2.5 sacks in last week’s 55-3 win over Vanderbilt.

As a result, Anderson is once again looking like a legitimate threat to win the Heisman Trophy.

Alabama EDGE Will Anderson Jr. currently holds +3000 odds to win the Heisman Trophy, according to DraftKings Sportsbook. That has Anderson tied for the seventh-best odds in the country. Here's the rest of the top contenders by the odds:

EDITOR'S NOTE: Alabama sports betting is currently prohibited so there are no sports betting apps in Alabama legally offering odds on the Heisman Trophy. Odds from DraftKings Sportsbook, which is available in other states, were used for this article.

Anderson is currently tied with Oklahoma quarterback Dillon Gabriel in the odds race. The Alabama defender's Heisman odds are the best of any defensive player in the country. In fact, among all defensive players, Anderson is the only one to rank in the top 70 in terms of Heisman Trophy odds, per DraftKings.

While Anderson is certainly something of a dark-horse contender as of now, he does have a shot to make history this year. Charles Woodson was the last defender to win the Heisman, and that happened all the way back in 1997. Notably, Michigan EDGE Aidan Hutchinson was a finalist last year, though he ultimately lost out to Anderson's teammate, Bryce Young.

What to Know About Will Anderson Heisman Run

Over the first two weeks of the season, Will Anderson managed just 10 total tackles and one sack. Since then, he’s been a man possessed. 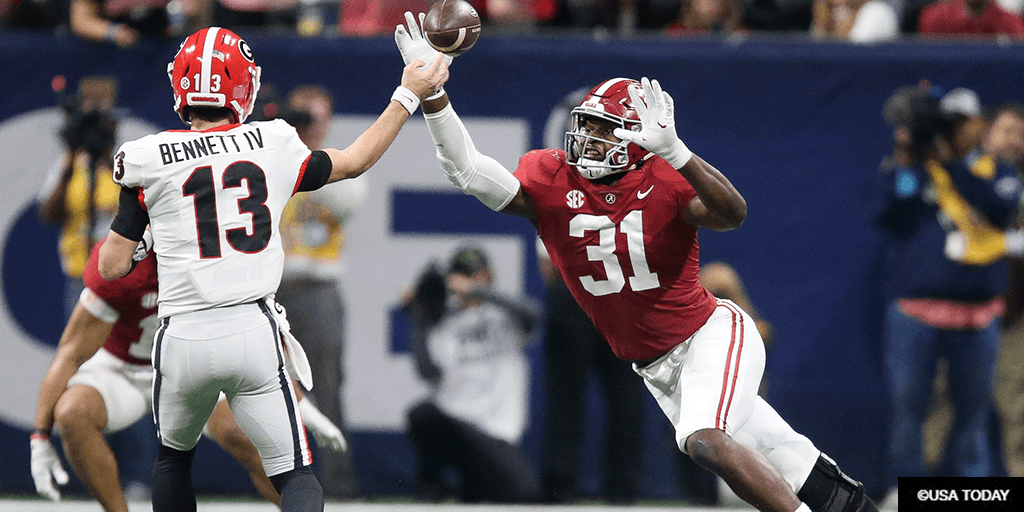 This past week, Anderson picked up where he left off with 2.5 sacks. Through four games, he now has 4.5, which ranks fifth in the country and second in the SEC behind only Arkansas’ Drew Sanders. Sanders happens to be an Alabama transfer.

The former teammates will meet on the field this week as the Crimson Tide travel to Fayetteville for a top-20 matchup. With the exception of a trip to Texas, Alabama has played a lackluster schedule to this point in the year.

That is soon to change as each of Alabama’s next three opponents are ranked in the top 20. For Anderson, it’s a golden opportunity to bolster his Heisman case. The bad news – if you want to call it that – is that it is an opportunity for his quarterback and reigning Heisman winner Bryce Young to do the exact same thing.

According to DraftKings Sportsbook, Will Anderson Jr. holds +330 odds to be selected No. 1 overall in the 2023 NFL Draft. That is the best odds for any defensive player and the third-best overall.

Anderson sits behind only his own quarterback Bryce Young and Ohio State’s C.J. Stroud in the odds for being picked first overall in next year’s NFL Draft. Anderson is the perfect fit for virtually any modern defense with his ability to rush the passer and tackle out in space. On rare occasions, Anderson has also shown to be capable in coverage.

Over the last nine drafts, EDGE players were selected No. 1 overall three times, including Georgia’s Travon Walker just this past draft. Since 2014, it is the only position other than quarterback to have a player selected first overall.

Alabama does not currently offer legal sports betting but anyone over the age of 21 can place a bet on Heisman odds as long as they are in a state with regulated sports betting like New York, Arizona or Virginia.

Will Anderson's odds to be selected with the top overall pick in the 2023 NFL Draft stands at +330. Those odds place him at the top of the list among all defensive players.

Will Anderson attended Dutchtown High School in Hampton, Ga. He was a highly touted five-star prospect with plenty of on-field success.

Yes. Michigan cornerback Charles Woodson became the first and only primarily defensive player to win the Heisman Trophy in 1997.

Alabama Has a New Top 10 Team with Basketball Ranked 4th

What Expectations Are There for Hugh Freeze in His First Year at Auburn?

Cited by leading media organizations, such as: