Jahmyr Gibbs Heisman Odds: Alabama Running Back in The Running for Heisman Trophy

Alabama Running back Jahmyr Gibbs has only 9 rush attempts in each of his first two games of the season. He was more involved in Week 2, catching 9 balls for 74 yards and his first touchdown of the season. He had just 22 yards on the ground averaging just 2.4 yards per carry.

Gibbs will have to show more production if he is to remain among the top Heisman candidates. According to DraftKings Sportsbook, Jahmyr Gibbs holds +3500 odds to win the Heisman Trophy in 2022.

Despite playing the last two seasons in a struggling Georgia Tech program, Jahmyr Gibbs shined. With good size and stature at 5-foot-11 and 200 pounds, Gibbs finished with more than 1,200 yards from scrimmage and seven total touchdowns last season.

Given the likes of Mark Ingram, Trent Richardson, Derrick Henry, T.J. Yeldon, Kenyan Drake, and others, this is high praise, but Gibbs might be the most versatile back to play for Alabama under head coach Nick Saban. Gibbs rushed for 746 yards and averaged a respectable 5.2 yards per carry in 2021. His 36 catches for 470 yards receiving led all ACC running backs.

In addition to his accolades as a runner and receiver out of the backfield, Gibbs also returned a kickoff 98 yards for a touchdown in last season’s 41-30 loss to Boston College. As a freshman in 2020, Gibbs had a 75-yard kickoff return in a 49-21 loss to UCF.

Things to Know about Jahmyr Gibbs

In 2021, Gibbs was named All-ACC at three different positions. He was named first-team All-ACC as the all-purpose player on offense, a second-team special teams player, and a third-team All-ACC running back.

Jahmyr Gibbs transferred from Georgia Tech to Alabama. He’ll have large shoes to fill as he’ll likely be tasked with replacing Brian Robinson Jr. Now a member of the NFL’s Washington Commanders, Robinson rushed for 1,343 yards last season and 14 touchdowns for the Crimson Tide. 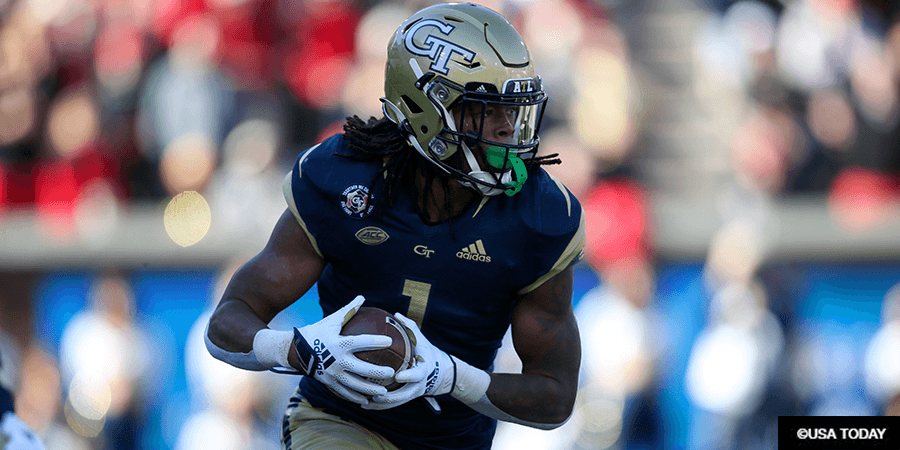 Where Did Jahmyr Gibbs Go to High School?

As part of the 2020 recruiting class, Gibbs was a four-star prospect and the No. 76 overall recruit in the country, according to the 247Sports Composite rankings. He was ranked as the No. 8 running back for the class and 10th-best player from Georgia.

Gibbs was offered a scholarship by Alabama out of high school, but chose Georgia Tech over the Crimson Tide and others such as Florida, LSU, Michigan, Ohio State, Texas and USC.

DraftKings Sportsbook is among a number of U.S. sportsbooks where bettors can wager on the 2022 Heisman Trophy winner.

Jahmyr Gibbs’ mother is Neka Willis. She was the first Black softball player ever to play at Dalton High School.

Alabama Has a New Top 10 Team with Basketball Ranked 4th

What Expectations Are There for Hugh Freeze in His First Year at Auburn?

Cited by leading media organizations, such as: